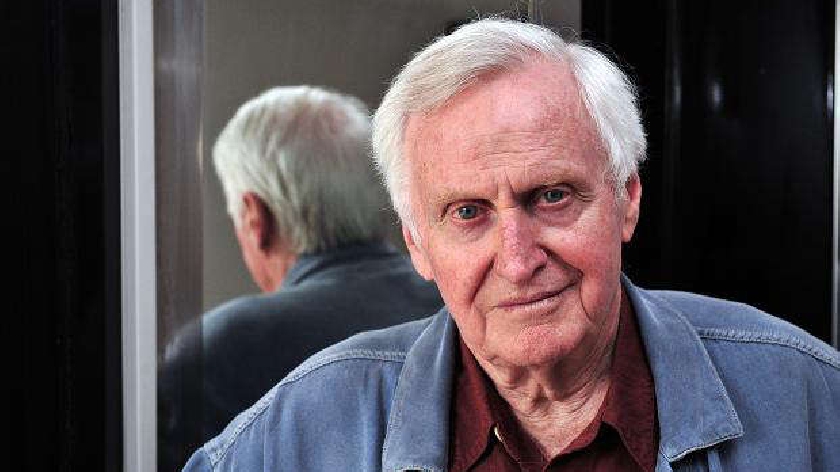 Mr Boorman, who directed such films as Deliverance and The General, has made Wicklow his home for a long number of years. He now plans to return to his native England to be closer to family.

At a ceremony in the Wicklow County Buildings, the Council conferred a civic award for a lifetime contribution to the screen industry and his lifelong commitment to the natural world bringing enrichment and honour to County Wicklow.

Cllr Paul O'Brien speaking on behalf of Cathaoirleach of Wicklow County Council, Cllr Tommy Annesley, said: “Today we have a very vibrant and strong film industry in the county thanks in no small part to John’s vision and commitment.”

Mr Boorman, he said, not only chose to make his home in County Wicklow; he was also a staunch supporter of the fledgling Ardmore Studios from its early years and went on to become Chair of Ardmore Studios, or the National Film Studios as they were known in 1975. In 1981 he went on to make Excalibur at Ardmore.

Mr Brian Gleeson, Chief Executive, Wicklow County Council, spoke about the value of the film and television work to Wicklow and to Ireland, adding: “In Wicklow we are fortunate enough to have two excellent studios in place at Ardmore and Ashford and a further studio development - Greystones Media Campus - due to commence construction in a matter of months.”

Aside from the Section 481 tax regime, the success of Wicklow’s screen industry has been attributed to a number of factors including its outstanding scenery, internationally recognised, experienced crew resident in the area, a range of locations, an excellent road network, proximity to Dublin city and its airport and ports, and Wicklow’s existing cluster of film infrastructure such as Ardmore and Ashford Studios and service providers .

Wicklow County Council, he said, had placed the Screen Sector front and centre in its Economic Development Strategy and thanks to the support of industry stalwarts, funding was obtained for the new Content Creation Enterprise Hub at Wicklow County Campus.

The Campus is also home to the newly established Screen Wicklow, Film & TV Crew Academy East, a partnership with Screen Training Ireland aimed at ensuring that we have the right people, with the right skills, in the right place at the right time.

Mr Gleeson said that while Wicklow had come a long way in the industry, it was thanks to the likes of Sir John Boorman who had provided “that magic ingredient, a sprinkling of stardust, that allows us to shamelessly namedrop with your name at the top of the list as we mention all the greats associated with the industry and with Wicklow -  the likes of John Boorman, Daniel Day Lewis and Jack Reynor are locals. We even had Saoirse Ronan as a resident for a short time.”

Mr Gleeson added: “You have been an outstanding Ambassador for the Screen Industry in Ireland and richly deserve this civic honour.”

Video messages paying tribute to Sir John were sent by leading Irish actors including Brendan Gleeson who spoke of how John had informed and educated young actors and filmmakers, while Gabriel Byrne acknowledged Mr Boorman’s contribution to the film industry as “inestimable.”  Adrian Dunbar said John was regarded as “the Father of the Irish Film industry”.

American movie star Jamie Lee Curtis talked about her love for John Boorman and read a poem from John’s Nature Diary titled ‘Oaks on Slopes.’   His son Charley Boorman thanked Wicklow County Council and spoke about “half of Irish Hollywood being there because of Dad”.

“Be it known that Wicklow County Council, being the Council for the Administrative County of Wicklow, in exercise of its powers under Section 74 of the Local Government Act, 2001 (as amended), resolved at its meeting on 7th November, 2022:

“To confer on Sir John Boorman a civic honour, in recognition of his lifetime achievements in the in the Irish and international film industry, championing Ireland and County Wicklow as a premier film-making location, nurturing the careers of Irish actors, directors, writers, producers and crew and in so doing bringing honour to the County of Wicklow.”

Sir John was presented with a basket of Wicklow Naturally produce along with a beautiful cheeseboard and cheese knife carved from windfall timber from County Wicklow by master craftsman Chaim Factor of Hill Picket Studios. He was also given a locally grown oak tree to take to his new home in the UK with its twin has been planted at Wicklow County Campus near the soon-to-be-opened Content Creation Enterprise Hub.

In addition, the Council plans to provide a bench for filmmakers of the future to sit and dream below Sir John’s tree and take inspiration from his outstanding career in the industry.