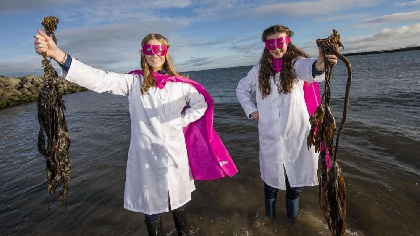 The Young Environmentalist Awards programme took place virtually and were officially opened by Minister for the Environment, Climate Change and Communications, Eamonn Ryan made an address. The YEAs is a nationwide programme that recognises and rewards young people aged 10-18 who have taken environmental action in their school or community,  and created and come up with creative solutions to solve environmental issues.

Over 2,000 young people have been involved in this year’s programme. Carbon Captures: Is Seaweed a Silent Superhero in the Battle against Climate Change? A project created by Ciara Kelly and Lauren Raferty from St. Mary’s College in Arklow has been named the Senior Climate Change Category Winners for their project which looked at compensating national carbon emissions by aquaculture bioremediation. The project focused on seaweed farming and how reintroducing seaweed back into the marine space may improve biodiversity, the fishing economy and the levels of CO2 in our atmosphere.

Elaine Nevin, Director of ECO-UNESCO said “Year on year the Young Environmentalist Awards Programme continues to showcase the very best of youth climate action, innovation and sustainability amongst our Schools, YouthReaches and Youth Groups. We are overwhelmed with the quality of the work, every project has undertaken this year and what a privilege to be able to showcase these projects this week, particularly as we celebrate Biodiversity week.” “In a recent survey by ECO-UNESCO, 60% of young people feel anxious about climate change so the Young Environmentalists Awards Programme is a great opportunity for young people to take the necessary steps to relieve these anxieties, involve their local communities and work towards building a better future.”

To celebrate, ECO-UNESCO hosted ECO-Week, from 16th to 20th May, including a range of environmental workshops, well-being activities, talks, and challenges for young people alongside the YEA Final Ceremony.

For more information on the Young Environmentalist Awards and all the awardees, please go to www.yea.ie