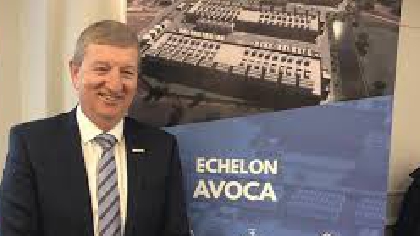 Just 12 months after announcing a €1 Billion investment in two Data centres in Arklow and Dublin, Echelon Data Centres has revealed plans to develop a second data centre in the town, representing a further €500 million euro investment by the company.

Echelon Data Centres Limited, a new Irish company, had announced last year that it will create 1,100 jobs through a €1billion development of data centres in Arklow and Dublin.

The Echelon Data Centre development at Avoca River Park at the former site of the Irish Fertiliser plant just outside Arklow, is due to provide over 450 jobs during construction with a further initial 90 full time positions when the centre is up and running.

However an objection lodged on the deadline to appeal the planning delays the project by at least 18 weeks, when the planning board is due to deliver it’s ruling.

Echelon is also due to construct a centre in Clondalkin in Dublin.

When completed they will provide 34% of the country’s entire data storage capacity.

190 operational positions will be created as part of the 1 billion euro investment.

A further 100 jobs expected at the second facility in the same business park.