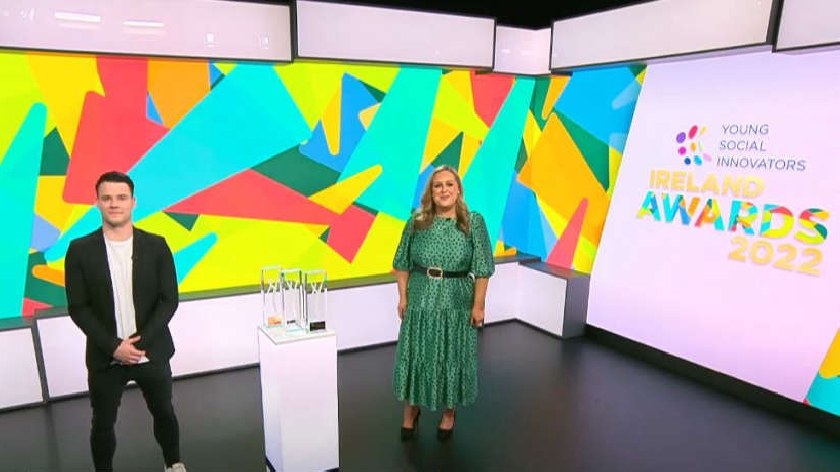 Two Wicklow schools were honoured at the Young Social Innovators of the Year Ireland Awards.

Two Wicklow schools were honoured at the Young Social Innovators of the Year Ireland Awards for their positive impact in helping to create a more equal, fair and sustainable world.

Receiving the Digital Innovators Award, supported by Virgin Media, a team from Coláiste Bhríde Carnew was recognised for its Be Aware, Don’t Compare project. The Coláiste Bhríde Carnew team was passionate about combatting the issue of negative self-image amongst teens. The team wants to push for a change in legislation in relation to the volume of edited and photoshopped social media posts and educate as many young people as possible on the issue. The team strongly believes that any photoshopped image posted to social media should be identified as having been altered. Minister for Health, Simon Harris, and Minister for Education, Norma Foley, are due to visit the school and the team have requested a meeting with both ministers to discuss these issues.

The Be Aware, Don’t Compare team was also Highly Commended in the Make Our World a Better Place for Young People Award, supported by the Department of Children, Equality, Disability, Integration and Youth.

Picking up the YSI Global Citizens Award, supported by Irish Aid WorldWise Global Schools, a team from Youthreach, Wicklow Town was recognised for its Carry on Caring project. The Youthreach team was passionate about combatting access barriers to the local community. The students’ innovative response to this issue involved raising money to upcycle bicycles and other necessities so that residents of Rathmore Direct Provision Centre can more easily access to the local village of Ashford. The team’s plan for the future is to work on the project and continue to identify and address any needs that come up.

The Carry on Caring team was also successful in receiving the Make our World Fair and Just Challenge Award.

Now in its 21st year, YSI focuses on empowering Ireland’s young people to reimagine the world and the communities they live in, by developing and implementing ideas that help create a fairer, more equal and sustainable world. Today’s Awards ceremony was compered by Virgin Media’s Zara King along with former Hometown member, and YSI Speak Out Tour Host, Dayl Cronin. It was a huge celebration of teenagers’ achievements in what has been a challenging year for students and their teachers.

This year’s programme saw participation from 6,123 Irish teenagers from 209 schools and organisations and the development of 423 social innovation projects nationwide on a wide range of issues including health and wellbeing, diversity and inclusion, the environment and sustainability and many more. 35 shortlisted projects competed for today’s headline and Challenge Awards with a variety of innovative projects.